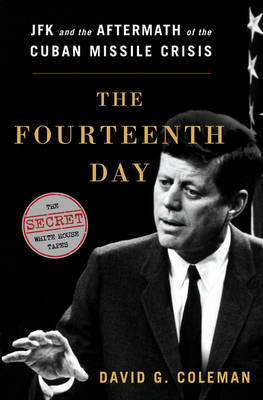 The Fourteenth Day: The Aftermath of the Cuban Missile Crisis - The Secret White House Tapes

On 28 October 1962, Nikita Khrushchev agreed to remove nuclear missiles from Cuba. History has marked that day as a seminal moment and the end of the Cuban Missile Crisis. As President Kennedy's secretly recorded White House tapes now reveal, the reality was not so simple. Nuclear missiles and bombers were still in Cuba, as were short-range missiles and thousands of Soviet troops. From 29 October, Kennedy walked a very fine line - pushing to get the nuclear weaponry out of Cuba, yet avoiding forcing Khrushchev into a combative stance. On the domestic front, an election loomed and the press was bristling at White House "news management". Using material from the tapes, David G. Coleman puts readers in the Oval Office at this highly charged moment.

An engrossing and revealing account... Coleman has provided an excellent analysis of both short and long term results of the crisis.

David G. Coleman, the director of the Miller Center's Presidential Recordings Program, is a history professor at the University of Virginia.