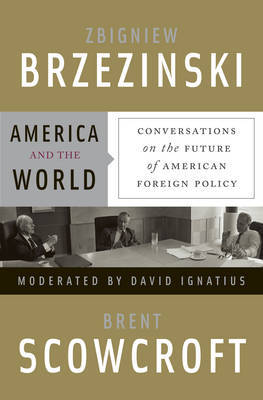 America and the World: Conversations on the Future of American Foreign Policy

The two most respected figures in American foreign policy define the international challenges facing the next president. This will be the must-read foreign policy book of the season. America's status as a world power and the nature of power itself are at historic turning points. In traditional terms, the US is the most powerful force in international relations since the Roman Empire, yet the ways that power can usefully be projected and the limits on what it can achieve are not what they were even fifteen years ago. It's essential that America understand and adapt to the new security environment. Two of the most respected figures in American foreign policy are Zbigniew Brzezinski and Brent Scowcroft - both former National Security Advisers. In "America and the World" they dissect, in spontaneous and unscripted conversations moderated by David Ignatius, the most significant foreign policy challenges facing the US: the Middle East, Russia, China, Europe, the Third World, the changing nature of power in a globalized world, and what Brzezinski has called the 'global political awakening'. While one author is a Republican and the other a Democrat, both are seen as independent, non-partisan voices of the center. They don't agree on everything, but they share a great deal of common ground. In particular, they agree on the need to adapt to a new international environment. "America and the World" will explore both their agreements and their disagreements, and in so doing, it will define the center of responsible opinion on American foreign policy at a time when the nation's decisions could determine how long it remains a superpower.

"(E)xcellent...what makes Mr Brzezinski's account interesting - and, in parts, intellectually demanding - is the sense it makes of the great swirl of shifting forces that set the context." Financial Times"

Zbigniew Brzezinski, formerly President Jimmy Carter's National Security Advisor, is a counsellor and trustee at the Center for Strategic and International Studies and a professor of American foreign policy at the School of Advanced International Studies at Johns Hopkins University. His many books include the New York Times bestseller Second Chance, The Choice and The Grand Chessboard. He lives in Washington, DC. Brent Scowcroft is President of The Scowcroft Group, an international business and financial advisory firm. He served as National Security Advisor to both President Ford and President George H.W. Bush and the Military Assistant to President Nixon. His extraordinary twenty-nine-year military career began with graduation from West Point and concluded at the rank of Lieutenant General. He is the co-author, with former President George H.W. Bush, of A World Transformed. David Ignatius is Associated Editor and Columnist of the Washington Post.