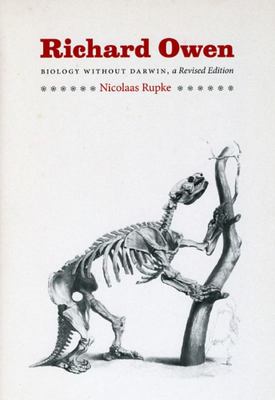 In the mid-1850s, no scientist in the British Empire was more visible than Richard Owen. Mentioned in the same breath as Isaac Newton and championed as Britain's answer to France's Georges Cuvier and Germany's Alexander von Humboldt, Owen was, as the Times declared in 1856, the most "distinguished man of science in the country." But, a century and a half later, Owen remains largely obscured by the shadow of the most famous Victorian naturalist of all, Charles Darwin. Publicly marginalized by his contemporaries for his critique of natural selection, Owen suffered personal attacks that undermined his credibility long after his name faded from history.

With this innovative biography, Nicolaas A. Rupke resuscitates Owen's reputation. Arguing that Owen should no longer be judged by the evolution dispute that figured in only a minor part of his work, Rupke stresses context, emphasizing the importance of places and practices in the production and reception of scientific knowledge. Dovetailing with the recent resurgence of interest in Owen's life and work, Rupke's book brings the forgotten naturalist back into the canon of the history of science and demonstrates how much biology existed with, and without, Darwin