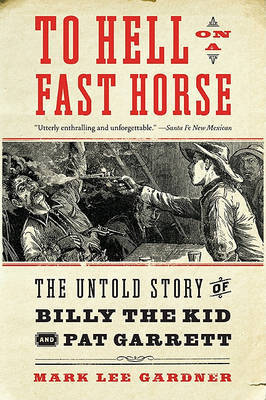 To Hell on a Fast Horse: Billy the Kid, Pat Garrett, and the Epic Chase to Justice in the Old West

To Hell On a Fast Horse brings to life the thrilling manhunt for the Wild West's most iconic outlaw.

It also will be the first dual biography of Billy the Kid and Pat Garrett, two larger-than-life figures from the American West who are inextricably linked - neither would become the stuff of legend without the other. Making excellent use of voluminous primary source material and decades of published scholarship on the Kid and Garrett, the book will go beneath the myth to take a fresh look at these two men, what they meant to one another, and what they would come to mean to an American public enamoured of a violent American West.

Mark L. Gardner has written a broad range of books and articles, both popular and scholarly, focusing on the American West. He has also written a number of interpretive guides for the National Park Service on subjects ranging from George Custer to Geronimo. Gardner has been an on-air consultant for several television documentaries and has worked with National Geographic Magazine and numerous museums and historic sites throughout the West. He is a visiting professor in the Southwest Studies Department at Colorado College in Colorado Springs. Gardner lives with his family in Cascade, Colorado.