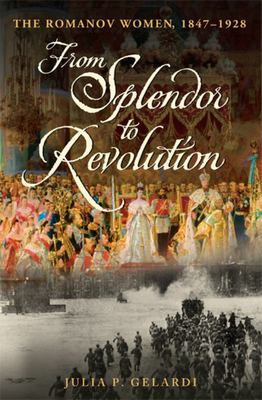 From Splendour to Revolution

The early 1850s until the late 1920s marked a turbulent and significant era for Russia. During that time the country underwent a massive transformation, taking it from days of grandeur under the tsars to the chaos of revolution and the beginnings of the Soviet Union. At the centre of all this tumult were four women of the Romanov dynasty. Marie Alexandrovna and Olga Constantinovna were born into the family, Russian Grand Duchesses at birth. Marie Feodorovna and Marie Pavlovna married into the dynasty, the former born a Princess of Denmark, the latter a Duchess of the German duchy of Mecklendburg-Schwerin. In "From Splendor to Revolution", we watch these pampered aristocratic women fight for their lives as the cataclysm of war engulfs them. In a matter of a few short years, they fell from the pinnacle of wealth and power to the depths of danger, poverty, and exile. It is an unforgettable epic story.

Julia P. Gelardi is the author of Born to Rule and In Triumph's Wake. She is an independent historian, currently living in Minnesota with her husband and two daughters.